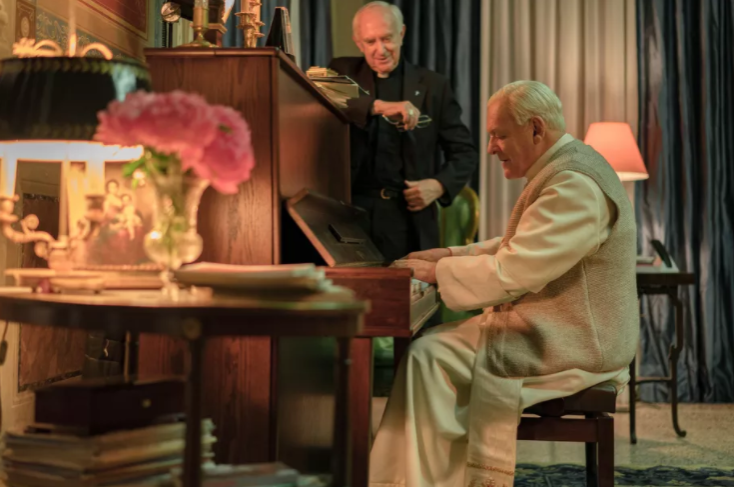 A review of The Two Popes

Published by Christopher Adam on December 27, 2019

The most striking aspect of The Two Popes is that it avoids being didactic, offering instead a complex portrayal of Cardinal Jorge Mario Bergoglio (Pope Francis) and Cardinal Joseph Ratzinger (Pope Benedict XVI). Although Bergoglio is liberally-minded, outgoing and pastoral, while Benedict is more conservative, introverted and academic, the film avoids tropes, depicting each in a multidimensional light. Fernando Meirelles’ film, starring Anthony Hopkins as Benedict and Jonathan Pryce as Francis, is dialogically oriented, offering unrushed and thoughtful exchanges between the two, set against the richly ornamental backdrop of the Vatican and of the Apostolic Palace of Castel Gandolfo.

The film is more of a character study of two prominent and contrasting members of the Catholic clergy than a carefully-paced narrative of events. The death of Pope John Paul II, the election of Benedict, the all-engulfing clergy sex abuse scandal and Benedict’s historic resignation from the Seat of St. Peter provide the framework for an in-depth exploration of two men struggling with doubt and exhausted by the institutional Church. Bergoglio wants to resign as Cardinal of Buenos Aires and return to being a simple parish priest and, by 2012, Benedict desires to resign as Pope. Bergoglio travels to Rome and in several exchanges with Benedict, tries in vain to ask him to approve his resignation.

Initially, their exchanges are characterized by tension arising from ideological, pastoral and cultural differences, awkward and uncomfortable silence and occasionally by dry, crusty sarcasm, especially on the part of Benedict. During a stroll through the gardens of Castel Gandolfo, Bergoglio suggests that God is always on the move and He is always in a state of change, while Benedict asserts that God is unchanging. Frustrated by Bergoglio, Benedict asks where people might find God, if He is always moving and changing. Bergoglio suggests, with uncertainty in his voice and in the form of a question: “On the journey?” To this Benedict responds with acidity while walking away in the garden: “Perhaps we’ll find God over there, on the journey. I’ll introduce Him to you.”

There’s lots of off-beat humour in The Two Popes and this too adds a human dimension and warmth to the film. When the cardinals gather to elect a new pope in 2005, the background music to the conclave is “The Dancing Queen“ from ABBA. This is after Bergoglio discloses to Benedict, then still Cardinal Ratzinger, in a brief discussion over the sink in a bathroom, that he quite fancies the Swedish pop music group and whistles the iconic song, which Ratzinger presumes is a hymn. Years later, when Benedict shocks Bergoglio by sharing with him in confidence his desire to resign, the Argentinian cardinal can’t understand how the Church could possibly have two living popes. Benedict noted that in 1978 the Church had three (Paul VI, John Paul I and John Paul II). An exasperated Bergoglio pointed out that they didn’t all serve at the same time, to which Benedict responded crustily: “It’s a German joke; it doesn’t have to be funny.” Throughout the film Benedict wears a step counter and in grave moments, a woman’s mechanical voice cuts through the severity by saying “keep moving” — also, perhaps, a reference to a world and a God in perpetual motion.

The film portrays both men as vulnerable and human. Benedict is a pianist and his aloof image softens when he immerses himself in the world of music, or when he says that he can no longer hear God — that God has stopped talking to him. At the same time, the portrayal of Francis moves beyond presenting him simply as a visionary liberal and modernizer. In the 1970’s, as Provincial of the Jesuits in Argentina, Bergoglio collaborated with the military junta, even while other priests, including Jesuits, spoke out courageously and faced imprisonment, torture and death. At one point, during a homily at a Mass in Latin America, a much younger Bergoglio stops speaking suddenly and sits down, telling parishioners that he is not worthy to deliver a sermon and that he would rather that they teach him today.

Decades later, when Benedict suggests that he will resign, Bergoglio argues forcefully in favour of the view that a Pope must suffer publicly and die in the job, because his moral authority in the world comes from his connection to the suffering Christ. As much as he advocates for change and progress, in this instance it is Benedict, not Francis, who is more open and receptive to change.

One of the strengths of the film is its thoughtful and complicated depiction of Catholicism, perhaps most notably the Sacrament of Reconciliation, or confession. As a young man in Argentina, Bergoglio is engaged to a young woman, but is still mulling the priesthood. His moment of decision comes during an unexpected confession in a darkened, empty church. Not done carefully, this could have been a mawkish moment in the film. But it wasn’t. Bergoglio wanders into the empty church when a priest in the distance sees him and invites him to the confessional, despite the fact that this was not Bergoglio’s intention. The jovial priest discloses to Bergoglio that he lives nearby the church, in a home for sick priests. Bergolio assumes that he tends to the elderly, sick priests, to which the father replies: “No. I’m one of them.” He has Leukemia. Bergolio asks why, then, he is in the church hearing confessions. To this he responds: “I woke up this morning and the Lord asked me to hear confessions. But nobody came, until you.” The scene suggests an intrinsic reciprocity to the sacrament, one which touches the penitent and the confessor.

Later in the film, Benedict and Bergoglio hear each other’s confessions, and we see each as vulnerable. Bergoglio is tortured by how he failed to protect his Jesuit brothers and Catholic faithful from a ruthless military junta in Argentina, while Benedict speaks of his failure to protect children from predator priests. In his closing words at the end of the confession, Borgoglio says to Benedict: “Truth may be vital, but without love it is unbearable.” The words serve as a reminder of Benedict’s own encyclical from 2009, entitled Caritas in Veritate (Charity in Truth).

Beautiful cinematography, combined with evocative music, including Mercedes Sosa’s “Cuando tenga la tierra,” reflective dialogue and a critically thoughtful perspective on the Church, all bolster the deeply credible acting of the leads in this film. It’s a meaningful way to spend a quiet afternoon or evening at home during the holidays.