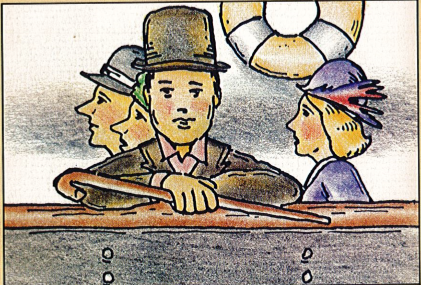 Book Review: The Ordeal of Gilbert Pinfold by Evelyn Waugh

British novelist Evelyn Waugh perhaps reveals more about himself through the fictional character of Gilbert Pinfold, a middle-aged novelist who suffers a mental breakdown brought on by the use of sedatives and pain medication, than through any of his other creations. Like Waugh, Mr. Pinfold is a convert to Catholicism who lives at a country estate somewhat withdrawn from society. With hints of the type of humour we see in some of Waugh’s other books, such as The Loved One, we read: “He had been received into the Church–‘conversion’ suggests an event more sudden and emotional than his calm acceptance of the propositions of faith–in early manhood, at the time when many Englishmen of humane education were falling into communism. Unlike them Mr. Pinfold remained steadfast.”

Leaving his wife and the cold of winter behind him in Britain, Mr. Pinfold set sail aboard the Caliban to Ceylan, in the hope that the warm weather would solve his aches and pains, and the quiet of the journey his mental stresses. Mr. Pinfold turned to chloral and bromide, sedatives that today are seen as especially toxic, as well as a mysterious pain medication, along with copious quantities of crème de menthe and brandy, to improve his sleep and also to put him in a more relaxed state, so as to help him write his novels.

Waugh writes from experience, and in fact he conveys what he endured with his own use of bromide and its hallucinogenic effects. Mr. Pinfold’s hallucinations aboard the Caliban are at times humorous in their absurdity, while on other occasions disturbing. It is to Waugh’s credit as an author that he conveys these hallucinations so vividly, and that he is able to take us seamlessly and suddenly from comic moments to scenes that are distressing to read. Mr. Pinfold’s hallucinations begin with him hearing what he thinks are various discussions and singing under the floorboards of his cabin, to an imagined conspiracy led by the ship’s captain, and a mysterious woman known as Goneril, involving the sadistic torture and murder of a steward.

On the more amusing end of this hallucinatory spectrum, Mr. Pinfold believes that he overhears a Protestant religious service underneath the floorboards of his cabin (“Mr. Pinfold had no first-hand acquaintance with the evangelical practice…his homes and his schools had professed to a broad-to-high Anglicanism”), followed by a clergyman chastising a member of the crew called Billy for having indecent photographs of women taped to his bunk bed.  Mr. Pinfold is thoroughly scandalized as he believes he hears this exchange through the floor:

“Billy, you know what we talked about last time. Have you done it again? Have you been impure, Billy?”

“God never tempts us beyond our strength, Billy. I’ve told you that, haven’t I? Do you suppose I do not feel these temptations, too, Billy? Very strongly at times. But I resist, don’t I? You know I resist, don’t I, Billy?”

Mr. Pinfold was horror-struck. He was being drawn into participation in a scene of gruesome indecency. His sticks lay by the bunk. He took the blackthorn and beat strongly on the floor.

“Did you hear anything then, Billy? A knocking. That is God knocking at the door of your soul. He can’t come and help you unless you are pure, like me.”

This was more than Mr. Pinfold could bear…”

In another moment of hallucination, Mr. Pinfold listens to a BBC broadcast where an acquaintance of his, a certain Mr. Clutton-Cornforth, speaks about “aspects of Orthodoxy in contemporary letters,” only to thoroughly besmirch Mr. Pinfold and his writing. A female voice then sings, over and over again, the mocking refrain:

I’m Gilbert, the filbert,
The knut with the K,
The pride of Piccadily
The blasé roué*…

On the far more disturbing end of the hallucinatory spectrum is a scene where a group of young antisemitic hooligans decide that Mr. Pinfold’s real name is Peinfeld and that he is to be whipped for being a Jew. The scene bears many of the elements of a nineteenth century blood libel. Peinfeld is accused of being a wealthy Jew out to corrupt the English countryside, of allegedly driving an honest English farmer to suicide, of abandoning his mother and letting her die a pauper, and of sodomy. In this scene we read: “‘He’s a peculiar man. Queer, aren’t you, Gilbert? Come out of your wooden hut, you old queer’…’We’re out for Peinfeld’s blood. We want to beat hell out of him.’…The night wore on, the charges became wilder and wilder, the threats more bloody. The two young men were like prancing savages working themselves into a frenzy of blood-lust.”

Waugh’s depiction of the irrationality of hate in this scene is vivid, striking and credible. The hooligans identify someone who they believe appears different (“the other”), they hold him responsible for all of their problems in the world and work themselves up into a delirium of hate.

The question of sexuality, and alleged homosexuality, reappears a few times in Mr. Pinfold’s paranoid hallucinations. It’s worth noting here that this theme is also present, indeed it is front-and-centre, in Waugh’s most celebrated book, Brideshead Revisited. In one episode, he thinks the passengers aboard the Caliban are gossiping about him:

“He is very peculiar altogether. His hair is very long.”

“He’s painted up to the eyes.”

“But he’s so shabby. I thought people like that were always smart.”

“There are different types of homosexual, you know. What are called ‘poufs,’ and ‘nancies’ — that is the dressy kind. Then there are the ones they call ‘butch.’ I read a book about it. Pinfold is a ‘butch.'”

In his mind, Mr. Pinfold believes everyone on the ship is talking about him behind his back: questioning his social status and the state of his manor, whether he is impotent, that he may be a fascist and also a communist, whether he is truly a Catholic or if he just pretends and if he is contemplating suicide, despite his religion forbidding it.

At a different point in the novel, Mr. Pinfold imagines that the ship is caught in the middle of an international crisis between Britain and Franco’s Spain over Gibraltar. He believes that Captain Steerforth, who just a day before was, in his mind, a sadist and a murderer, now “stood quite alone as the representative of international justice and British prestige.” That image of the Captain, however, does not last, as Mr. Pinfold imagines yet another conspiracy, this time against him.

Waugh does not develop in a meaningful way any of the characters other than Pinfold. Normally, that would weaken a novel, but in this instance, it makes sense. We see the ship and all the passengers through the thoroughly warped mind of Mr. Pinfold. This story is about him and his increasing delirium. He is consumed by himself and everyone else in this story is merely a spectator. The Ordeal of Gilbert Pinfold is a convincing tale of the protagonist’s mental unraveling.

*Blasé roue is a reference to what in late 19th century Britain was considered to be a fairly vulgar burlesque entitled Ruy Blas and the Blasé Roué.