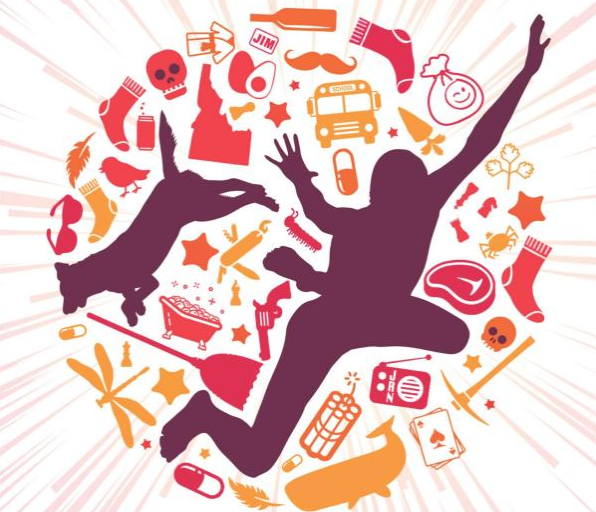 Published by Christopher Adam on August 5, 2019

Patrick Canning’s thoroughly quirky novel about a depressed janitor from Idaho who finds himself in the midst of a bizarre game feels like an adult psychedelic take on The Wizard of Oz, or else a literary escape room. Replace Dorothy with Jim, the dog Toto with a scruffy mutt called Mars, the Yellow Brick Road with, in the first part at least, the vast blue waters of the Pacific, Kansas with Idaho and the Wizard of Oz with Ozymandias, the mysterious man who pulls the janitor into a high stakes existential game. The narrative, the motley characters and the language are all immensely imaginative.

Jim is an unhappy 24 year old janitor at a sanatorium in Idaho called St. Militrude. The narrative quickly dissuades one from trying to do research on who this saint may have been, noting: “no canonical record exists for any saint named Militrude nor any record of the name Militrude, regardless of piety.” It’s a dreary, thoroughly institutionalized place. Jim has been so depressed that he is about to end his life when a curious resident called Ozymandias, or Oz for short, intervenes. Ozymandias is a bulky presence, wears a signature seafoam green robe and his diet consists entirely of tenderloin steak, black cherries and milk. His name is a reference to Percy Shelley’s 1818 sonnet by the same title, in which one of the verses reads: “My name is Ozymandias, king of kings; Look on my works, ye Mighty, and despair!'” The sonnet was about Ramesses II of Ancient Egypt, also referred to as Ozymandias, and explored how even the mightiest of rulers will eventually die and how their legacy will be little more than crumbling ruins–fleeting remnants of their vanished glory.

This enigmatic, self-absorbed resident called Oz is Jim’s ticket out of St. Militrude–a place which has left an unenviable impression on his mind:

He knew all the smells of burnt coffee, of aged decaying skin, or re-heated meatloaf, of rubbing alcohol, musk cologne, and expired prune juice. He knew all the sounds of night terror screams, unmotivated laughter, racial slurs (both time-tested and newly-invented) threats (both annoyingly-vague and alarmingly-specific), and the singing voice of the old Québécois man on the third floor who tragically knew only the first two words of his favorite song: the Canadian national anthem.

An obelisk in the basement of St. Militrude transports Jim far away from Idaho, to the endless blue waters of the Pacific, where he is lost at sea and must somehow survive, alongside two companions: a fiercely loyal, yet no-pushover dog named Mars and a mild-mannered but mentally fragile Belgian painter called Barnabus (and later in the story simply Barney) who is in love with all colours, except for one.  Barnabus has a rather unfortunate phobia: he dreads the colour blue–an unhappy state of affairs when you’re at sea. We read: “The thing he hated most in the world had swallowed him up, blocking out all other reality as it tried to enter his body at any opportunity. No delirious soliloquy of colors came to sooth his brain…” At one point, there is a description of Barnabus that is beautiful in its simplicity. He is “a human huddled under the cloak of madness.”

According to the bewildering game Cryptofauna, Jim must use his intellect, instinct, his companions, which eventually includes an ageing hitman in search of peace, and what’s called “the Asset” (a small bag of dust) to escape and win the challenge. We only really learn more about this game nearly a quarter of the way through the book, when Jim is sitting with Oz in St. Militrude’s cafeteria. Jim discovers that Oz must be some a demi-god; mostly human, but with the godly quality of hardly ageing and of having seemingly superhuman strength. It’s after Oz himself, many years earlier, was selected to become a participant in Cryptofauna that he was rendered “a touch less mortal.” Cryptofauna is a game based on an inter-generational rivalry. Oz’s nemesis is called Nero, and both Oz and Nero have young “disciples” who continue the original rivalry on their behalf, while also spawning a new one between themselves. Jim’s rival, accordingly, is a rough-and-tumble, semi-literate character with seemingly no moral compass called Boyd.

Among the most colourful characters is Whip–a potentially sociopath jinn who first appears in the form of a dragonfly and in the next moment becomes a whale or later as a small business owner with emerald eyes. Whip is the wild card in this bizarre game; thoroughly unpredictable and independent of all the other characters. At times, we learn about the status of the game from the “impartial” news reports of Max the spider (also a jinn), broadcast on the Jinn Radio Network.

While so much of this novel has other-worldly qualities to it, the geographic locations are very much in this world: we go from the Pacific, to a laundromat in rural Alabama to a peculiar underground abbey in Boston, populated by monks who survive on a diet of carrots and dandelion wine, and who dabble in a mystifying and addictive mint elixir.

A novel like Cryptofauna is difficult to pull off. At times, the narrative is so absurd and the direction of the plot quite confounding that the reader must be convinced to suspend his or her disbelief and just stick with it. The narrative is exceedingly rich and vivid in imagery; so much so, that it takes not insignificant mental energy as a reader to weave your way through the ornate prose. Yet Canning’s clever use of language and his inventive, offbeat humour carry this winding and eyebrow-raising story from beginning to end.