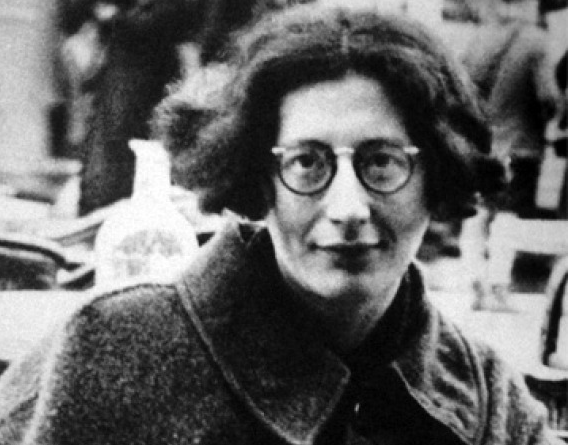 Published by Christopher Adam on November 27, 2019

Tortured by a scrupulous desire for intellectual honesty, struggling with the paradoxes of Catholicism and attentive to the quiet presence of the neglected, Simone Weil is among the most compelling Catholic thinkers of the twentieth century. Weil’s vocation was to remain on the margins of the institutional Church. Waiting for God, published posthumously in 1951, is a raw work. One third of the book is comprised of Weil’s letters from 1942 written to Fr. Joseph-Marie Perrin, a Dominican priest serving in Marseilles who became her spiritual adviser. The collection also includes a handful of essays written by Weil, in which she draws from the deep well of Catholic mysticism, while also adding to it. Both the letters and the essays were written against the fiery backdrop of the Second World War and the occupation of France. Weil’s call for catholicity is rendered all the more timely and passionate by the conflagration around her.

Weil was 32 years old at the time of her introduction to Fr. Perrin. She was also near the end of her life. Moved and fascinated by the concept of human affliction, she began her adulthood advocating for workers and sought to share in the experiences of the working class, to the extent that this was even possible, given her family’s privilege. She worked in a Renault factory, then in 1936 participated briefly in the Spanish Civil War as part of an anarchist military column. Living in emigration in England, she hastened her death at just 34 years of age by refusing to eat anything other than food similar to the meagre rations of the people of occupied France, even as her body was already weakened by tuberculosis.

Although Fr. Perrin’s responses to Weil’s letters are not included in the collection, we can draw two conclusions about their relationship and how the Dominican priest saw this introspective young woman. Fr. Perrin had a deep respect for her introspection and her intellect. He was also intent on having her understand that her challenging and sometimes “unorthodox” theological reflections were not obstacles to her being formally received into the Catholic Church. Fr. Perrin wanted very much to see Weil–coming from an Agnostic Jewish family but since 1937 engaged with Catholic mysticism– finally participate in the Sacrament of Baptism.

The overarching context of the six letters in this collection is Weil’s explanation to Fr. Perrin of her persistent decision to refuse baptism. On the one hand, Weil sees herself as unworthy or ill prepared for the sacrament, even as Fr. Perrin attempts to reassure her that this is not the case. On the other hand, intellectual honesty dictates that she refuse baptism in a Catholic Church that is not catholic enough to accept, just as they are, people of any religious background or of no explicit religious faith; unable to appreciate in them what Weil speaks of as an implicit faith. In her fourth letter to Fr. Perrin, intended as a type of spiritual autobiography, Weil writes:

Christianity is catholic by right but not in fact. So many things are outside it, so many things that I love and do not want to give up, so many things that God loves, otherwise they would not be in existence…Christianity being catholic by right but not in fact, I regard it as legitimate on my part to be a member of the Church by right but not in fact, not only for a time, but for my whole life if need be…There is an absolutely insurmountable obstacle to the Incarnation of Christianity. It is the use of the two little words anathema sit. It is not their existence, but the way they have been employed up till now. It is that also which prevents me from crossing the threshold of the Church, the universal repository, on account of those two little words. I remain beside them all the more because my own intelligence is numbered among them…

Weil learned Sanskrit and valued much of The Bhagavad Gita. She also reflected on her own upbringing in an Agnostic home and her involvement in secular trade union movements. This led her to explore the concept of an implicit faith, which is present in people outside the Church. Such people instinctively practice a love of the created world that binds them to God, even when these same people are dismissed or rejected by the Church. In her sixth letter to Fr. Perrin, Weil writes:

Less vast things than the universe, among them the Church, impose obligations which can be extremely far-reaching. They do not, however, include the obligation to love…Every existing thing is equally upheld in its existence by God’s creative love. The friends of God should love him to the point of merging their love into his with regard to all things here below…It is true that we have to love our neighbor, but, in the example that Christ gave as an illustration of this commandment, the neighbor is a being of whom nothing is known, lying naked, bleeding and unconscious on the road. It is a question of completely anonymous, and for that reason, completely universal love.

The realities of World War II reinforced Weil’s conviction that striving for catholicity is the great human challenge. Weil notes poignantly: “in our present situation universality, which could formerly be implicit, has to be fully explicit…It has to permeate our language and the whole of our way of life.”

What Weil seems to be grappling with is a question that has to cross the mind of any reflective, thinking Catholic. If many outside the Church are instinctively good, loving and drawn to embrace the afflicted, then to what degree is being Catholic or Christian merely incidental to the ingrained human capacity to be good, which is shared by all and practiced, in different ways, by many? Later, in one of her essays, Weil frames the problem of the Church’s lack of catholicity in an especially stark way: “How can Christianity call itself catholic if the universe is left out?”

To suggest that Waiting for God is primarily about the virtue of being inclusive would be an injustice to the complicated religious philosophy of Simone Weil. At the heart of her thought is the concept–embraced, but not developed by her–that it is not in the gift of humans to be in search of God, but rather it is specifically God’s task to be in pursuit of us. Our role is to be attentive to God’s “secret” presence in the world. Learning to be attentive, according to Weil, is the ultimate goal of all education–both religious and secular. It is not the mathematical equation that matters, nor indeed the lexical knowledge of any discipline, but the effort placed into paying attention. It is attentiveness that allows us to detect the presence of those who suffer quietly, recognize in the afflicted the human who is like us, and it also lets us sense the transcendental.

Attentiveness is all the more important, given that God consents to ceding His power and authority over the universe, furnishing humans instead with the illusion of their personal power and special significance. Attentiveness allows us to detect a God that has made His presence faint and fleeting, while also appreciating that our own power and centrality in a vast universe is imagined and illusory. As Weil sees it, humans are given the choice of consenting to relinquish their illusory power. When in human relationships there is a power imbalance, yet the person wielding power consents to relinquish it so as to empower the other, it is an act of kindness — even love. Weil writes:

Just as God, being outside the universe, is at the same time the center, so each man imagines he is situated at the center of the world. The illusion of perspective places him at the center of space; an illusion of the same kind falsifies his idea of time; and yet another kindred illusion arranges a whole hierarchy of values around him. This illusion is extended even to our sense of existence, on account of the intimate connection between our sense of value and our sense of being…We live in a world of unreality and dreams. To give up our imaginary position as the center, to renounce it, not only intellectually but in the imaginative part of our soul, that means to awaken to what is real and eternal, to see the true light and hear the true silence…To empty ourselves of our false divinity, to deny ourselves, to give up being the center of the world in imagination, to discern that all points in the world are equally centers and that the true center is outside the world, this is to consent to the rule of mechanical necessity in matter and of free choice at the center of each soul.

Weil speaks much about concepts of reality and unreality. One of her positions is that facts frequently blind us from the depth of reality. Among Weil’s admirers in Europe was János Pilinszky, Hungary’s most preeminent twentieth century Catholic thinker and poet. In a 1978 televised Hungarian-language interview entitled “Loyalty in the Labyrinth” (Hűség a labirintusban), Pilinszky attributes the following quote to Weil, which he shares in Hungarian and which I will translate to English:

The world exists. It is bad, it is unreal and it is absurd. God does not exist — He is good and He is real.

In some ways, this quote reads like an aphorism. It begs the question: do we have any ability, living amidst the constraints of facts, the finite nature of our intellect, of reality seen from our particular perspective and limited by our senses, of at all understanding or imagining anything more than small, tentative aspects of what we call God?

Waiting for God begins with Weil’s explanation of her refusal to participate in the Sacrament of Baptism. In doing so, she is both self-critical, as well as critical of the institutional Catholic Church. Fr. Perrin, as both a priest and as Superior of the Montpellier Convent, was a representative of this institutional Church and he was also formed by it. Yet he displayed keen interest, understanding and patience when speaking or corresponding with Weil — a complex, unorthodox and at times undoubtedly frustrating thinker. We also know that Fr. Perrin was courageous and principled — in these years, he promoted dialogue between Christians and Jews and provided refuge to persecuted Jews, ultimately leading to his own arrest by the Gestapo. It is also thanks to Fr. Perrin that Weil’s theological writings survived and were published close to a decade after her death.

When reading Weil, we sense that as she writes these essays and letters, she is struggling with concepts of affliction, God, the denial of the self, the love of the created world and love of the neighbour. She is working through these concepts before our very eyes. It feels like a work in progress. This is perhaps fitting, given that our understanding of the transcendental is such that it is always ready to slip through our fingers.