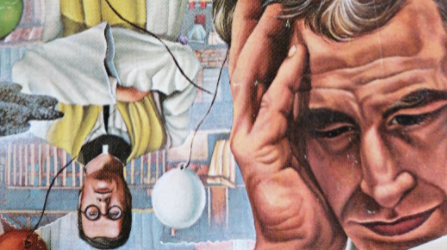 Published by Christopher Adam on December 30, 2019

Set in a sweltering Colombian town during the 1950’s, In Evil Hour explores life in a repressive regime, once the dictatorship transitions from an initial period of overt political violence to the “peaceful” consolidation of power. This tenuous peace, however, is built on censorship and self-censorship, and on the exhausted acquiescence of its residents.  The town’s dull stability is punctured by the appearance of lampoons. An anonymous perpetrator affixes posters accusing the community’s respected or privileged residents of engaging in scandalous behaviour. In one instance, a lampoon accused one of the town’s women of lying about trips that she had taken in recent months, alleging that these excursions were not, as she had claimed, to get her dentures fitted, but rather to have an abortion. In other instances, the lampoons accused the town’s men of adultery.

Nobody was truly shocked by these allegations when they appeared, as these had all been the quiet talk of the town, the subject of whispers, for a long time. The person affixing the accusatory posters, however, had dragged out into the light of day that which everyone had been speaking about in hushed voices at home and in private circles. It was not the content of the lampoons that created fear and frenzy in the town, at least among the more prominent residents. The fear stemmed from what they imagined would be the consequences of the lampoons — of speaking so openly.

One resident who appeared entirely tranquil amidst all the trepidation was Judge Arcadio’s wife — a woman the respected judge had saved from a life on the streets, and took in — but never married. In a story where everyone seems profoundly repressed, the judge’s partner certainly isn’t. Reading about their active sexual life stands in striking contrast to a proudly “decent” town where movies are verified against a list of censored films before they are screened in the local cinema, where church bells warn when prohibited films are about to be shown, and where only government sanctioned newspapers exist. When Father Ángelo–the town’s priest who collaborates with the tyrannical mayor, but also tries to tame his cruelest instincts by being a voice of morality– pleads with Judge Arcadio’s pregnant wife to finally get “properly” married so as to avoid scandal, especially once her child is born, she responds confidently to the priest. The brief exchange strikes at the heart of the novel:

“It’s better to do things frankly,” she said. “Others do the same thing but with the lights out. Haven’t you read the lampoons?”

“That’s gossip,” the priest said. “You have to legitimize your situation and put yourself out of the range of gossiping tongues.”

“Me?” she said. “I don’t have to put myself out of the range of anything because I do everything in broad daylight.”

Gabriel García Márquez alludes to the repression, hypocrisy and the stifling nature of a consolidated dictatorship through the recurring images of rot, stench, decay and heat in the book. During a flood, a dead cow is washed up near the banks of the river — the stench lingers over the town. Father Ángel’s decaying church is infested with mice; one day, Father finds a dead one floating in the baptismal font, a place where new life is normally celebrated. The town’s homes are insect-ridden, and toxic insecticide mixes with the smell of stale air and cooked food in the asphyxiating heat.

Márquez manages to paint a portrait of repression using both foreboding and repulsive imagery, as well as lyrical language. For instance, we read about the widow Montiel who “lived alone in the gloomy nine-room house where Big Mama had died and which José Montiel had bought without imaging that his widow would have to endure her solitude in it until her death. At night, while she went about through the empty rooms with the insecticide bomb, she would find Big Mama squashing lice in the hallways, and she would ask her: “When am I going to die?”‘ The scene is one of utter despair and the imagery is sickeningly vivid. In contrast, just a few lines below, we read of another widow: “On the porch that overflowed of the song of birds, the widow Asís was lying on a canvas chair, her face covered with a handkerchief soaked in Florida water…” Though the widow Asís is an unhappy figure, tortured by insomnia, the image of her on the porch with the song of birds and the whiff of perfume is strikingly different from that of the widow Monsiel’s home.

In small, personal ways, the residents of this repressed village do make their views of the regime known. The regime is represented in the persona of the authoritarian and hypocritical mayor, who despite his power, cannot get help when he is tortured by a tooth abscess. The dentist refuses to treat him as a result of the political violence that he and his party inflicted on the town in prior years. He is only able to secure treatment, eventually, through threat and force. At another point in the novel, the mayor helps himself to lunch in a private home without being invited. He tries to be amicable with the woman in the home. She has none of it. While she does not stop him from eating, she also does not hold back how much she resents him. “May God give you indigestion,” she curses. When the mayor asks her how long she would hold on to her anger and resentfulness, she responds: “Until you people bring the dead you killed back to life.”

In Evil Hour is a parable of a dictatorship and more specifically, an account of life after authoritarian rulers have consolidated their power and have subjugated their people into quiet acquiescence. The dictators “mercifully” end the political torture. The same ones who just a few years prior engaged in the worst acts of violence now, after having extinguished the opposition, speak happily of societal peace. Márquez shows just how thin a veneer this peace really is.