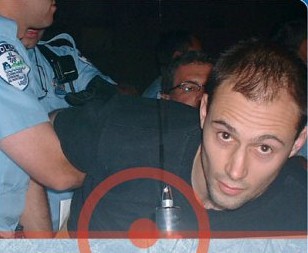 Published by Christopher Adam on January 19, 2020

Memory is a peculiar thing. I attended Montreal’s Concordia University during the same years as Yves Engler. Reading his book — part memoir, part explanation of what may draw Canadian youth to embrace radical activism — brought long forgotten memories to the surface, including events that seemed so momentous at the time and once consumed my thoughts, but which nearly two decades of life had erased entirely. Today’s first-year Concordia students were not even born when the events that form the foundation of Engler’s book were happening.

I was an elected representative on the Concordia Student Union’s council in 2001/2002 — one year before Yves Engler joined the CSU’s executive as Vice President responsible for media relations. As Engler notes in his book, the CSU executive and council had been radically left-wing in its politics for a number of years. Reading Engler reminded me of the contentious student handbook entitled Uprising produced by the CSU in 2001, which he describes as having been a pro-Palestinian and anti-capitalist publication that “sent many into a state of uproar.” I was one of them. Thinking back, I recall feeling that the handbook, named after the Second Palestinian Intifada, was crass, vicious and violent. The student handbook became headline news in the Montreal Gazette, earned editorial condemnations and Québec’s Minister of Education in the leftist-separatist Parti Québécois government, François Legault, contemplated intervening. On October 16, 2001, I co-authored with my CSU colleague Catherine Letendre a piece for Concordia’s main student weekly, The Link, entitled “The CSU’s Hateful Agenda” denouncing Uprising. Later, a handful of us who felt alienated by the CSU developed an alternative and politically moderate umbrella association for students called the Arts and Science Federation of Associations (ASFA). By the time of Israeli Prime Minister’s scuppered visit to Concordia University in September 2002, which resulted in a riot and set in motion events that would lead to Engler’s suspension, I had been put off by student politics that seemed divorced from the local bread-and-butter realities of a large, diverse urban university, where many students were mature part-timers who struggled to balance jobs with their education.

In one chapter, Engler gives a taste of the sort of passionate debate that unfolded within the offices of the CSU through a fictional discussion, but one mindful of the tone and content that characterized student politics. In a somewhat nostalgic retrospective, Engler writes about the CSU’s offices on the 7th floor of the Hall Building: “You could find stimulating conversations at noon or midnight. You could listen quietly or participate actively with people from many different parts of the world who voiced opinions from anarcho-feminist to Marxist-Leninist to mainstream social-democratic. It was the perfect place to learn about the entire range of ‘left-wing’ points of view.” Engler then proceeds to recreate a heated exchange on the role of violence in achieving social justice, on “smashing windows” in order to send capitalists and their supporters a message, on class war, whether violence and vandalism is a good way to engage “ordinary” people, and whether all of this is nothing more than “juvenile male testosterone.”

What the young men and women in those heated CSU offices fail to ask as they engage in passionate debates is where all of this leaves the Concordia student and single mother who scrambles from her class two floors below in the Hall building to the Zellers in the lower level of the Alexis-Nihon plaza, in order to be on time for her shift. They are not really engaging with her, their discussions are academic and their circle is insular. There is no doubt that the CSU played a crucial role in the education and personal growth of a group of young men and some women who were negotiating their place in the world in those early years of the twenty-first century. But for many of us, it wasn’t a welcoming and safe space, and it wasn’t inclusive.

I bought Engler’s 2005 book after I found that he was recently a presenter along with a colleague and friend of mine at a book fair organized by Black Rose Books. I wanted to learn more about what made a student radical and contemporary of mine from Concordia University “tick,” as well as how he saw those years. Coming from a middle-class background, once a boy with a deep passion for hockey and whose childhood was divided between Vancouver and Montreal, and between English and French milieus, Engler writes about having been an “outsider” at different times in his formative years. In English Canada he was perceived as French, while in French Canada, he was seen as an Anglophone. “I think that when you are made to feel like [an outsider] you become more sensitive to injustice and unfair treatment, whether aimed at you or others,” explains Engler. Later, he adds poignantly: “Maybe all of us are outsiders in one sense or another. Maybe no one fits in completely, no matter where you are.”

Engler is most compelling when he is reflective, and there are times throughout the work when this is precisely what he does, trading polemics for introspection.  He writes about how his travel in Latin America brought him face-to-face with profound injustice. When a thinking, compassionate person is witness to this, can he or she truly feel unmoved or not feel compelled to act? Engler recounts abject poverty and oppression in Guatemala and speaks of the stark contrast with the “conspicuous consumption” of the western world. While Guatemalans had no running water or indeed clean water, had their best local produce exported rather than available for their own population and where Engler played soccer with Guatemalan boys who navigated shards of glass on the ground in their bare feet, in Malibu, Pepperdine University had just received millions of dollars from a donor to purchase fresh flowers for every table in the student cafeteria for the next ten years. If we are all part of a single human family, a point that Engler makes in his book, then this is perverse.

In Playing Left Wing, Engler recounts being on a flight with a Mexican migrant, who wondered anxiously whether he will be allowed to enter to the United States so that he might work and send money home to his family, while Engler had no worries at all about the American border check. This encounter opens up a discussion about the nature of free trade, its impact on labour, the rise in Mexican migration to the U.S. and the Mexican economy’s reliance on its nationals working in the U.S. and sending support to their family back home. Engler also explores North America’s excessive consumption of meat and the detrimental environmental impact of industrial farming, especially on the global south. That knowledge led Engler to embrace a vegetarian diet, out of both solidarity and health considerations.

In a discussion on healthcare, Engler, the son of a nurse, writes about how corporate interests promote curative medicine, the area where big pharma stands to make the most profits, while governments neglect public health promotion, which can be most effective in preventing health problems in the first place. Engler notes: “Should we be surprised that so much of medicine is driven by the same interest as the rest of our profit-driven economy? If we are, it is only because we project our values, that medicine is about healing and nurturing, onto the medical industry. We forget that the only reason today’s medical establishment appears even slightly humane is as a result of struggles by activists for regulation of medical practices.”

Engler’s starting point as each topic is explored is often an observation drawn from personal experience, after which he uses a range of secondary sources, often from newspapers, to explain the injustices that exist around us from a quantitative and qualitative perspective. The book is accessible to a broader audience, which may occasionally hear and read about radical left-wing politics, in which Engler remains highly engaged, but is not personally invested or perhaps finds it off-putting.

Activists play a crucial role in placing a mirror in front of society, compelling all of us to take an honest look at ourselves individually and collectively. Sometimes, activists are prophetic. At the same time, social justice calls for introversion too. If we are activists, what truly motivates us to act and what personal fears or biases influence how we act? How does threat perception influence how we interact with our opponents and how does it also impact how our opponents interact with us? Being conscious of this does not mean that we must water down our values, nor that we ignore injustice so as to avoid challenging people. It also shouldn’t mean that we put a damper on our passion. It does, however, call us to engage in a periodic examination of our own conscience and to reflect on the perception that we develop of our adversary.