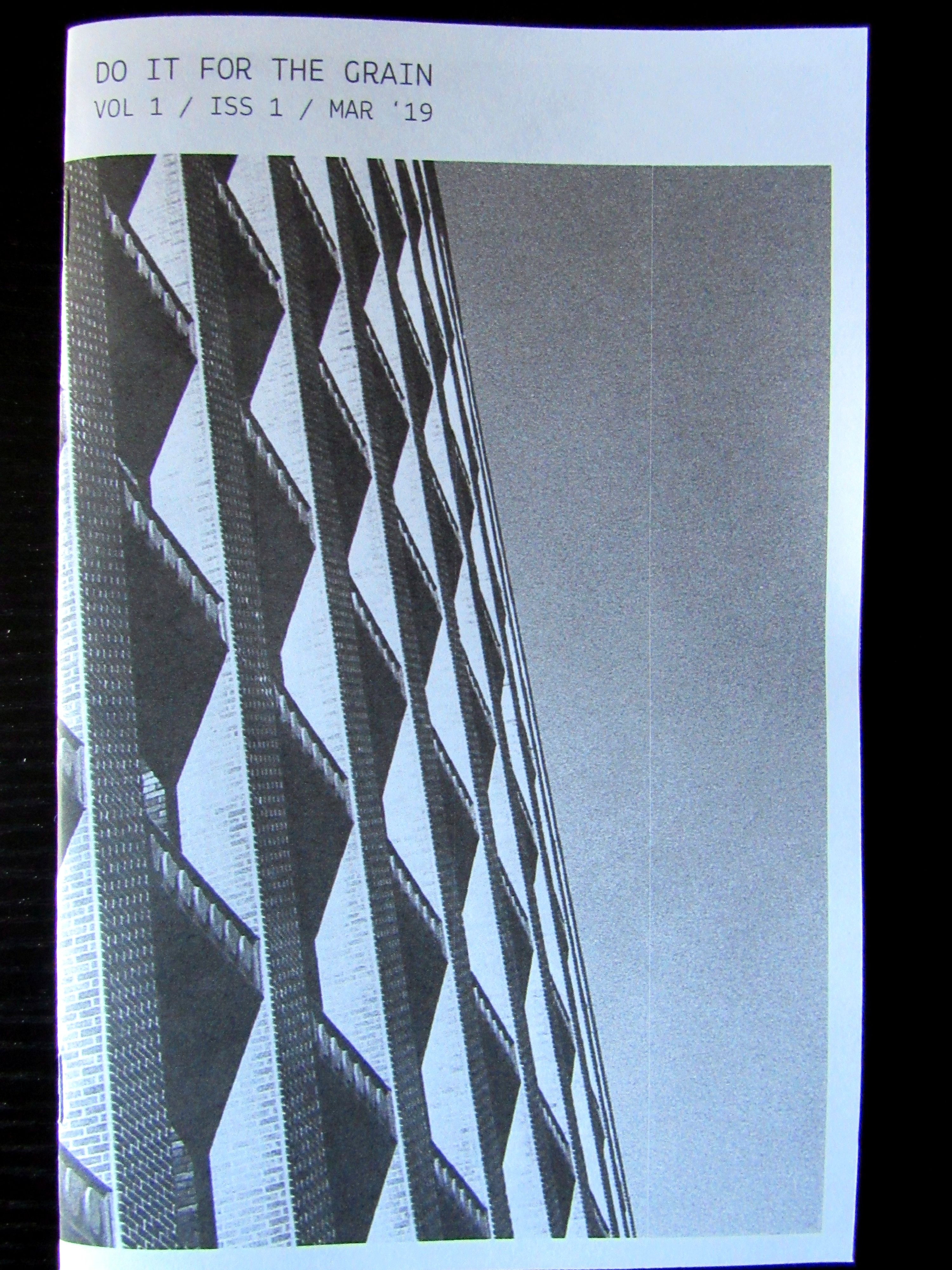 Published by Christopher Adam on April 17, 2019

I stumbled upon a curious little print publication this Wednesday at lunch. I sought a Cubano sandwich at The Working Title Café in the hall of what used to be All Saints Sandy Hill Anglican Church and ended up taking home an unpretentious, yet delightful zine of analog black and white photography by Ottawa area photographers. The inaugural issue of Do It For the Grain appeared in late March 2019 on sixteen black and white pages, initially printed in 150 copies, and available free of charge at a handful of local businesses in the central neighbourhoods of Ottawa. The first batch of copies flew off the shelves and more were printed to meet the interest within the community.

Do It For the Grain is rich in terms of the textures of the analog photographs on its pages, while being frugal with the written word. In fact, the only place words appear are on the last two pages of the publication. The images speak for themselves and don’t need additional help. Yet this is where we grasp the essence of what the creator of this initiative, Kenneth Yams, aims to achieve. He writes: “Do It For the Grain is a celebration of the physical in an increasingly virtual world. Analog black and white photography is a professional, yet accessible, honest, and democratic medium–just like the city this zine represents.”

I love the feel of print publications and I’m perhaps among the few thirty-something Canadians who still subscribe to a couple of print papers. I also read books in print in order to get a short break from the screens that are otherwise ever-present in my life. As Kenneth explains: “Trying to separate my life from the internet has led me to more traditional and physical means of entertainment, to which the art of analog photography naturally lends itself. There is certainly something to be said for the wide reach of social media, but Ottawa’s increasingly vivacious arts community is worthy of celebration in a tangible form as well.”


Of course, there’s an irony to all of this–as there so often is in life. Do It For the Grain would not have been possible without social media and all the trappings of the Internet–including the Kickstarter campaign which raised $766 in start-up funds. These monies were used to purchase an affordable high-volume printer, as well as enough paper and ink for the first three issues of the publication.

Kenneth Yams engages in some self-criticism after the release of the first issue. He writes: “Most pages have thin lines running across them, many zines aren’t perfectly folded, and it wouldn’t surprise me if there were a few with doubled pages. I’m ok with this, as it gives us lots of space to improve.” As a grateful Ottawa resident who took home one of the first 150 copies, I am more than okay with these imperfections. In fact, I loved the thin lines that do indeed appear on many of the pages. It is the natural warmth of the analog world, in much the same way that the pops and crackles of vinyl records lend music a geniality and even coziness that cold digital “perfection” could never offer.

DIFTG is a semi-regular publication and it’s probably as grassroots as it gets. It isn’t immediately clear to me when the next issue will appear, but I hope it does in the foreseeable future. Every so often we all need to revisit the fading analog world.