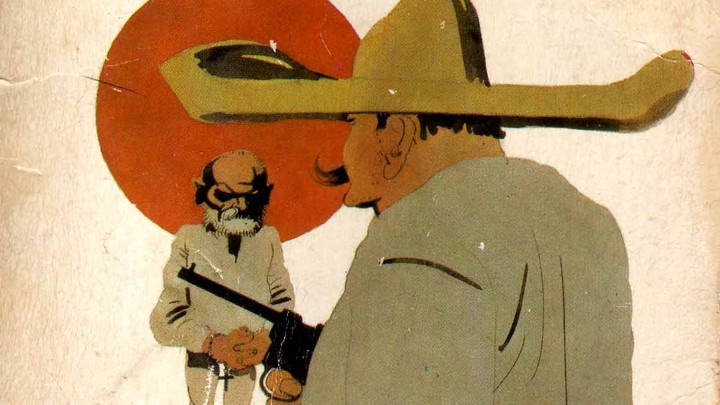 Book Review: The Power and the Glory by Graham Greene

Published by Christopher Adam on April 28, 2019

During a period of intense anti-Catholic persecution, a nameless priest wanders through Mexico as a fugitive, trying to evade authorities that have placed a 700 peso bounty on his head. Stemming from pride, mortification and a sense of pastoral mission, the destitute priest hears confessions, anoints the sick and celebrates Mass in the communities he visits. But is father bringing salvation to the people who take him in or rather hastening their martyrdom? Authorities threaten with death those who harbour the fugitive priest, but promise a reward for those who assist in his capture. In The Power and the Glory, Graham Greene weaves a Calvary story around temptation, sacrifice and salvation.

In some ways, The Power and the Glory is the quintessential Catholic novel. As the homeless father wanders the southern Mexican state of Tabasco, mostly wearing tattered peasants’ clothing and travelling on a mule, rural Catholic men and women seem to have an intrinsic ability to recognize his concealed status as a priest. Sometimes his words, tone and habits give away that he is a learned man, but there is also something unspoken and implicit that makes it impossible for him to conceal his identity when he encounters Catholics. Living in abject poverty and, as a result of an anti-Catholic purge, stripped of their churches and priests, father is seen as the only one who can bring them salvation. He alone can dispense God to the abandoned faithful. He sees himself as “a damned man putting God into the mouths of men.”

Father perceives himself as damned not primarily due to the persecution he faces, but because of his own vices: alcohol, having broken the vow of celibacy, feeling despair and pride. We read: “He was a bad priest, he knew it. They had a word for his kind — a whisky priest, but every failure dropped out of sight and mind. Somewhere they accumulated in secret — the rubble of his failures. One day they would choke up, he supposed, altogether the source of grace.”

First and foremost, The Power and the Glory is a twentieth-century Calvary story set in rural Mexico. Father travels on a mule, much like Christ traveled on a donkey. These are animals of peace. In contrast, the lieutenant who is hellbent on capturing the priest travels on a horse–an animal of war. There is a scene in the book where the priest tells time by listening to when the cocks crow–again, a biblical reference, specifically to Peter’s denial of Jesus.

Father also comes across a character,  a mestizo (mixed race) man, who he fears is preparing to betray him, much like Judas betrayed Jesus. The nameless mestizo recognizes that the protagonist, who at this point attempts to conceal his identity, is indeed a priest. “You understand about God, don’t you? Perhaps you’ve got him there — in a pocket. You carry him around, don’t you, in case there’s anybody sick. Well, I’m sick. Why don’t you give him to me? Or do you think he wouldn’t have anything to do with me…if he knew?”

The man is desperate for the priest to hear his confession and give him absolution. But the priest remains convinced that he is dealing with Judas. The man persists: “Shall I tell you what I’ve done? It’s your business to listen.” The priest tries to talk the man out of giving a confession, but he proceeds to present a list of sins that run the spectrum from not fasting during Lent and eating meat on Fridays to adultery. The priest recognizes that the mestizo man is, indeed, extremely ill–likely suffering from malaria. He seemed more vulnerable than threatening. As father observes: “this Judas was sick and unsteady and scared in the dark.” But he was also convinced that the 700 peso bounty was too great a temptation for a man as poor as this mestizo. While the priest denies the ill man his request for absolution, he does show mercy by letting him ride his mule, while he walks along on the side, barefoot. This is where we have one of the most powerful scenes in the book:

Christ died for this man too: how could he pretend with his pride and lust and cowardice to be any more worthy of that death than the half-caste? This man intended to betray him for money, which he needed, and he had betrayed God for what? Not even for real lust…

A voice said: “You are the priest, aren’t you?”

‘Yes.’ It was as if they had climbed out of their opposing trenches and met to fraternize among the wires in No Man’s Land.

‘Yes,’ he said again, and the mule plodded on.

At the centre of his own faith there always stood the convincing mystery — that we were made in God’s image. God was the parent, but He was also the policeman, the criminal, the priest, the maniac, and the judge…He would sit in the confessional and hear the complicated dirty ingenuities which God’s image had thought out, and God’s image shook now, up and down the mule’s back, with the yellow teeth sticking out over the lower lip, and God’s image did its despairing act of rebellion with Maria in the hut among the rats. He said, ‘Do you feel better now? Not so cold, eh? Or so hot?’ and pressed his hand with a kind of driven tenderness upon the shoulders of God’s image.

Elsewhere in the novel, the homeless priest is taken in by villagers who quickly recognize that he is a father in hiding and, in something resembling a frenzy, want to get as much out of the encounter spiritually as possible: Mass, confessions and baptism. Father, however, is exhausted and asks that he be allowed to sleep, promising the sacraments in the morning. But the villagers don’t want to miss this opportunity or run the risk that by dawn, the priest will have been captured. Father is so tired that he dozes off in the middle of an absolution. When after the first confession he is asked if other villagers could come too, the priest breaks down in frustration.

“‘Oh, let them come. Let them all come,’ the priest cried angrily. ‘I am your servant.’ He put his hand over his eyes and began to weep.”

The old man who had just confessed took the priest’s weeping to be a sign of his holiness and therefore urged others in the village not to disrespect father by failing to go to confession. “What do you think he has come here for? He is a very holy father. There he is in my hut now weeping for our sins.”

One of the key concepts explored in Greene’s novel is how age, life experience and sinning can make one more empathetic. At several times, there are references to the days when the whisky priest was a figure revered by his parishioners–he was young, respected and powerful. As an older man, marked by life, poor decisions, vices and his persecution, he is both humbled and increasingly filled with empathy. Speaking about when he was once a young priest: “What an unbearable creature he must have been in those days–and yet in those days he had been comparatively innocent. That was another mystery: it sometimes seemed to him that venial sins — impatience, an unimportant lie, pride, a neglected opportunity — cut you off from grace more completely than the worst sins of all. Then, in his innocence, he had felt no love for anyone: now in his corruption he had learnt.”

The nature and impact of mortal sin, especially dying in this state, is a recurrent theme in Greene’s Catholic-themed novels. We see this poignantly in The Heart of the Matter and also in The Tenth Man, which I reviewed for this site. In each of these books, the character facing his or her predicament is one with a particularly deep conscience, struggles with guilt and fails to truly forgive him or herself. In many Anglican services, the priest will declare: “God forgives you, forgive each other, forgive yourself.” In Greene’s novel, the Catholic protagonists are often incapable of believing that God forgives and they are even more dismissive of the possibility of forgiving oneself.

The Power and the Glory is a masterfully paced narrative. Its language is often gritty and graphic–describing a hot, humid, hellish darkness in this corner of southern Mexico in the early twentieth century. It explores concepts of power and powerlessness, sacrifice and martyrdom, and whether the deeply human “whisky priest” can lighten the darkness around him, and in him, by becoming a Christ figure for others and for himself.