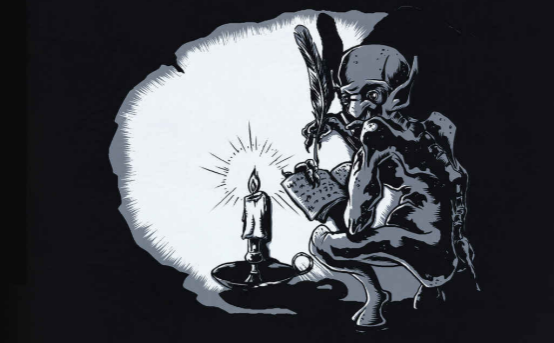 Benoit Chartier, the Ottawa area author of the anthology The Calumnist Malefesto, breaks the negative stereotypes often attached to self-publishing, offering readers a skillfully edited collection of engaging and atmospheric prose. Each story is unique, the themes diverse and the language varied–the latter adjusted to fit the tone of the given narrative. There is a reflective morality and spirituality that runs through all of the pieces in this anthology. While this is mostly a subtle undercurrent, in the last story, entitled “Interview,” it rises to the surface. Chartier explores the concept that all humans are created in the image of God and that, by extension, God is at once a little Indian girl, a bespectacled Arab man, a mother in a Hijab and a grey-haired gay woman. This reminds me of a scene from Graham Greene’s The Power and the Glory, which I reviewed this spring, and the idea that we meet God in each other.

Chartier’s stories have a celestial quality to them, while at the same time being grounded with characters, scenes and scenarios that are relatable to the average reader. In one case, we meet Paul Devry, who is excited to be among the first to purchase the newest and most advanced smartphone. Little does he know that the phone has a mind of its own. Playing with the concept of artificial intelligence, “Julia,” the phone’s voice and personality, can do almost anything for Paul–and ends up doing rather a little too much for him, including spending all of his money and amassing a debt–all in “Julia’s” pursuit to make Paul a better person. This is a humorous and cautionary tale of artificial intelligence.

At least one of the stories in the anthology is deeply personal to the author; this also happens to be one of the most powerful narratives. In “A Visit from Mr. Dark,” an elderly and quaint gentleman lets an odd stranger into his home. The guest is Death, but prefers to be called Mr. Dark. The elderly gentleman isn’t worried at all, as he pours his guest some tea. “You seem like such a nice person. I don’t understand why people are so terrified of you,” he remarks. Mr. Death responds in kind: “I always find it refreshing to have a conversation with someone who invites me into his home.” The elderly gentleman is mainly interested in finding out whether there is an afterlife and if he will be reunited with his late husband, whom he clearly loved and continues to love even in his absence. At the end of this story, the author adds the only dedication to appear in this anthology. Chartier shares: “To my great-uncles, both still living, who, because of their many decades together show us all the meaning of being a loving couple.” (To see Chartier read this story, watch his video here or see his other videos here.)

In some cases, the author transports us convincingly to real-life destinations far from our home in the West. We travel from a twenty-first century urban environment in North America to the life of the orphaned Adeena, her Uncle Kosha, a maker of copper kettles in Kabul, Afghanistan, and the little girl’s magical pet Djinn. Later, Chartier takes us to the Nikko mountain in Japan, where we see the world through the eyes of the young Daisuke. It’s in this story, where Daisuke has an out-of-body experience following a terrible car accident, that we have a line which, for me, sums up the concept behind much of Chartier’s anthology. Daisuke’s mentor, Professor Ishii, recounts one of his own near-death experiences to the young man and says: “I could not reconcile my knowledge of reality with my experience.” This seems to be the essence of what Chartier writes: what we are taught about reality may not be in sync with our own unique experience of life. This is the space where imagination and the singularity of personal experience pushes outward the boundaries of lexical reality. Chartier, speaking through his character Professor Ishii, puts it well: “There is a disconnect between the events that occur, for whatever reason, in the known universe, and our interpretations of these.”

As someone who seldom reads fantasy or science fiction, I had to ask myself: what is a potential use or purpose of imaginative fiction beyond simply offering readers a colourful escape from mundane realities? I think that The Calumnist Malefesto helped me find an answer to my question. Fantasy, although naturally other-worldly, gives us the necessary distance to honestly reflect on our world and on our shortcomings as a society. For a moment, we can almost become a visitor to our world, an outsider, giving us an opportunity to truly see the forest from the trees.