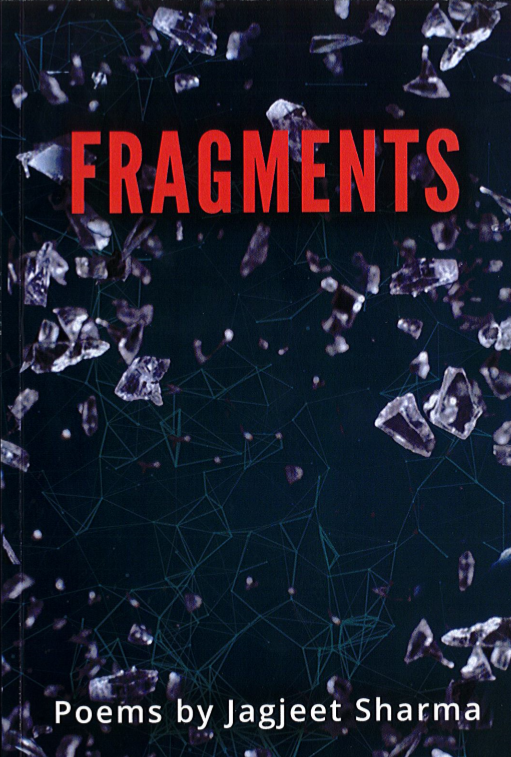 Ottawa-based freelance author and poet Jagjeet Sharma’s newly released anthology Fragments offers poetry that straddles and explores the crossroads of traditional and contemporary society, as well as East and West. Our cultural roots and memories colour how we live in the present day. Sharma’s poetry is cognizant that time forms a continuum and as such, the past bleeds into the present.

This succinct anthology explores four broad themes. The first is hyperlocal to Ottawa, as a handful of poetic fragments grapple with the grief of the fatal OC Transpo bus crash in January 2019. Images of snow and ice combine with shattered glass and blood; together they symbolize the lives crushed and lost in a single, cold moment. Death and grief, however, leads Sharma to prayer and meditation, as she asks for her fears to be calmed, and to be granted compassion and humility.

The second theme explores the fate of girls and women, especially the violence they face throughout much of the world. Perhaps the poem that was most profound, in spite of its simplicity, was the one entitled “Handloom saris,” where a young woman’s thoughts are wrapped up, either to protect or to hide them from the world, in a saris.

She cradles
her thoughts
wraps them
tightly in handloom saris
yellow, green, blue
purple or blood red
these creatures of desire
they snatch, break, maul, unwrap them

What is the root cause of violence and abuse against women? Sharma’s poetry identifies at least two. On the one hand, we have men in positions of power and of financial means who see women as property; objects to which they are entitled. The second cause, however, is the fact that women turn their backs on other women and on girls, and refuse to speak up against injustice. In a poem entitled “News of the day,” the victim is both a little boy who had been killed and his mother, who is left to grieve alone. “She had no one to help her / she gathered him up like a roll of paper / struggled to hold onto him / as she scrambled to stand up.” This poem reminds me of how we are desensitized to so much of what we see or read about in the news. Images of death, even a dead child in the streets and his grieving mother, often fail to move us, especially if the tragedy happened far from home.

The third theme is that of refugees; here we travel from Pakistan and India to Canada, from the separation of the two countries in 1947, through partition, to a new home — all thanks to Sharma’s poignant imagery. The partition, with boundaries drawn by elites along religious lines, between Hindus and Muslims, spawned displacement and a refugee crisis. An autumn walk with Sharma’s father in one of the poems reveals a refugee who sees small fragments of his former home in Parachinar, Pakistan, in Ottawa’s natural landscape. “Chinar trees, like maple trees / yellow, orange, red / lost homes, chaos…” Sometimes memories encapsulate fragments of nature from back home, especially when Sharma writes about her grandfather’s garden in Delhi–of the afternoon heat and haze, where “yellow marigolds shined along the pathway to the house” and “ants streamed along the side walls, doorways / looking for ways to cool down.”

Finally, the last collection of vignettes are reflections on humankind’s connection with nature. That connection is strongest in the poem “Cremation,” which presents us with the imagery of a traditional funeral pyre. Here too, as in each section of the anthology, the divine makes an appearance. This volume, even when the poems are relatively simple, moves one to reflect–on contemporary society, power structures, the surviving fragments of our own traditions and on ourselves.