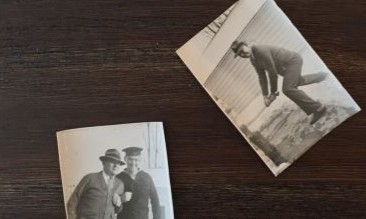 Published by Christopher Adam on April 26, 2020

Ryan R. Latini’s Love Notes for Modest Young Men presents us with a motley crew of characters who populate a collection of short stories told in the first person. The author sent me a copy of his first book of fiction in exchange for an independent review. I am especially interested in learning about the experiences of emerging authors before reviewing their work. These life journeys are often varied and colourful. I discovered that this author had as a mentor a Jesuit priest. In addition to teaching at a community college and a high school in New Jersey, Latini has dabbled in the world of content writing. None of these are unusual paths for emerging authors who recognise that bills can’t go unpaid. But as I can attest from my own experience, content writing will take one down the most unexpected and varied trails. A good content writer is the anonymous voice speaking from the shadows authoritatively,  who can somehow master (or appear to master) any topic from dog walking, to the ins and outs of organising bridal showers, to the real estate market to ice cream. Latini has written on all of these topics. To survive in the world of content writing, one has to write convincingly in a range of voices, and one must be open to the often sundry nature of the human experience. All of these characteristics are present in Love Notes for Modest Young Men.

One of the most hauntingly human stories in this collection is entitled “Do Not Pass When Signal is Flashing.” The narrator is a cross-dressing school bus driver who transports kids to and from school “for the benefits.” His marriage is strained and mostly loveless, his wife seems unsupportive and the one life-giving aspect of his existence occurs at the end of the day, in an empty school bus. As the sun sets, along a deserted strip of gravel, he dons a fake fur coat and sunglasses, as he performs Barbra Streisand’s “Happy Days Are Here Again” to the empty seats on the bus. At first glance, there’s a profound sadness to this story; the narrator’s life and unrealised dreams seem to make for such a pitiful existence. Yet at the same time, this narrative is one of personal agency too. The protagonist has choices and he comes to his own decisions. An example of flash fiction, this story is atmospheric, even in its simplicity and brevity.

In the short story “Some Sort of Stray,” the narrator recalls when he was a 12 year old boy in the middle of a dizzying, guilt and fear-ridden experience that reads like a gritty confession. The boy kills a neighbour’s dog by a stream and leaves the dead animal in a gutter, only to then stumble upon the dog’s owner, a 16 year old girl, who convinces the boy to help her look for the “lost” pet. He doesn’t admit to what he did, and while helping the girl look for the dog in vain, he is seduced by her. The narrator is tormented in this grubby coming-of-age story — by his conscience, by ghosts, by a neighbour who pressures him into a sexual experience, by his past and his own abandonment. What are the consequences of a childhood gone astray? This seems to be the central question posed in the story. Equally critical, however, is the consequence of adulthood gone astray. In “The Faculties of Wonderful Virtue,” we again witness the theme of sexual exploitation, as David, the owner of a fruit and nut distribution company, exploits the narrator, Franklin, promising him promotion in exchange for a sexual encounter with him. We also see the narrator’s striking loneliness in the world, his reliance on his friendship with a beagle named Alpha, on the two-dimensional women appearing in Macy’s catalogues and his illusory relationship with Miss Magnolia from the Fantasy Show Bar, all to mitigate his forsakenness.

The story entitled “Division Day” links closely to “Some Sort of Stray.” Here, we have a narrator who admits to being the type of person who would steal someone’s wallet and then help that individual look for it — not unlike a boy who kills a dog, only to then assist in the charade of an unsuspecting owner searching for her pet. This narrator, however, is a demon and is engaged in a one-sided, jarringly cruel conversation with a homeless drug addict under a bridge in Camden, New Jersey.

“I’m a floater across your eyeball — a thread, a cobweb, a handful of dust. I was just floating down Newton Creek on my back, saw you sleeping–well, that’s not entirely true–I saw your aura. Your wretched glow drew me in,” explains the demon, as the story balances on the edge of the metaphysical and yet at the same time offers a very real, gritty tale of addiction, despair and a father estranged from his family. As in “Some Sort of Stray,” the story embraces the image and concept of water, but it is not there to cleanse, though it does serve to transport.

The next story, “The Infinity of Delight,” also has a father, like in the previous narrative, who is lost to addiction and not present in the life of his child. The father is little more than a shadow. Here too, there is abandonment, loss and human relationships that seem to get off on a decidedly flawed footing, especially after the death of the narrator’s mother — known among the men in town as Divine Lorraine. And noteworthy too is that the narrator, Jack, works for the River Authority (once again, water imagery), but the Cruise Terminal where he spends his days hasn’t seen a ship dock in years. “We’re ghosts and we wait for ghost ships, but we get paid real money,” explains his co-worker. In this story, the narrator begins dating online and connects with a woman who seeks a man “with a good heart,” while he advertises as seeking “a girl with a good kidney.” These are literal desires, and all the while there is a persistent voice in the narrator’s mind called Robin, who lives in the attic and speaks to him through the HVAC ducts.

The characters in these stories are all ghosts, in one way or another. Nobody in the world sees them, as though they were never there and had no value. In one story a child’s own parents don’t realise until age five that he has six toes on one foot. In another, the narrator tries to stop being just a shadow by forcing himself to enjoy poker games as a new hobby. In most cases, these characters are incapable of seeing themselves and understanding their place in the universe. Sometimes, life in these stories appears to be little more than matchbox cars and the static, artificial world of tiny plastic people who inhabit model train sets and are manipulated by their owners. Is there even such a thing as having a place in a vast, absurd universe that seems indifferent to human existence? These themes float in and out of each story in this anthology. We face existential questions and tread on the border of the painfully real and the darkly mystical.