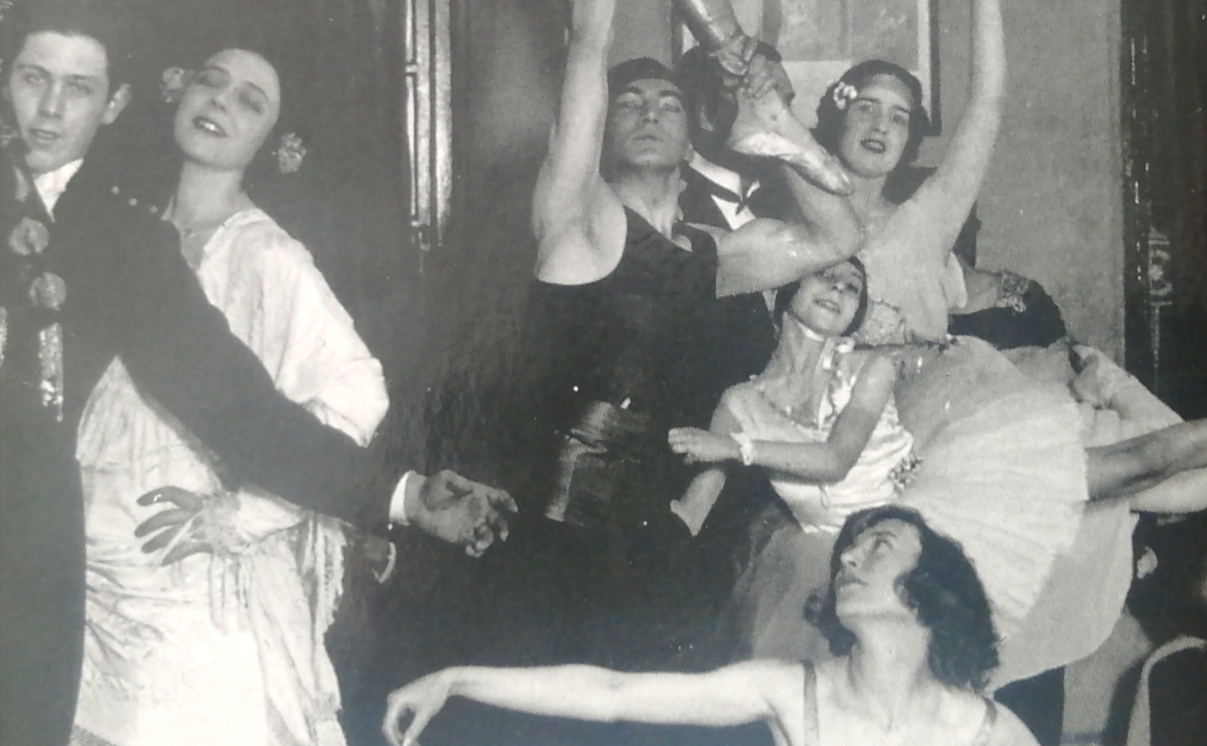 Published by Christopher Adam on March 13, 2022

The 1930 novel Vile Bodies is where we truly experience Evelyn Waugh’s humour, his masterful dialogue and his searing commentary on high society in interwar Britain. Much like The Loved One or Decline and Fall, Vile Bodies reflects on serious and uncomfortable subject matter through satire and by channelling the absurd. At the heart of the novel is Adam Fenwick-Symes, a fledgling novelist who claims that he can finish writing a book every month or so. We meet Adam, and a large handful of other characters, on a ship carrying passengers from France to Britain. Two of these characters–one of them being Adam–experience a rather unpleasant fate at the hands of British customs officers. Adam’s most recent manuscript is confiscated and burned, as it’s deemed scandalous. This leaves him unable to deliver as previously agreed his completed manuscript to the London publisher — a project for which he had been paid an advance. We also meet Miss Agatha Runcible, who undergoes a strip search at the hands of customs officers. She is suspected of possessing stolen jewellery. Her treatment causes scandal and provides much “shy-making” material for tabloid writers. The gossip pages are full of her ordeal. We also learn that she’s extraordinarily hedonistic, superficial and often dresses in men’s suits. Her life is comprised of little more than travelling from one soirée to another in her endless pursuit of pleasure, excitement and alcohol. When she’s lying in a convalescent home after suffering a car crash, she throws a party from her hospital bed, complete with cocktails and singing. The pursuit of pleasure is nearly the only thing that most characters in the book seem to ever do.

There’s an apt description and listing of these decadent parties and the compulsion to seek them out in the novel. Adam is talking with his fiancée Nina, noting the endless partying. Waugh then provides an entire paragraph in parenthesis listing these. Near the end of this scene, her old childhood friend — now a wealthy man called Ginger, who eventually asks for Nina’s hand in marriage — shows up to express how much he’s enjoying the party at hand.

(…Masked parties, Savage parties, Victorian parties, Greek parties, Wild West parties, Russian parties, Circus parties, parties where one had to dress as somebody else, almost naked parties in St. John’s Wood, parties in flats and studios and houses and ships and hotels and night clubs, in windmills and swimming-baths, tea parties at school where one ate muffins and meringues and tinned crab, parties at Oxford where one drank brown sherry and smoked Turkish cigarettes, dull dances in London and comic dances in Scotland and disgusting dances in Paris — all the succession and repetition of massed humanity…those vile bodies…)

He leant his forearm, to cool it, on Nina’s arm and kissed her in the hollow of her forearm.

“I know, darling,” she said and put her hand in his hair.

Ginger came strutting jauntily by, his hands clasped under his coat-tails.

“Are you enjoying yourself, Ginger?”

“Rather, I say. I’ve met an awful good chap called Miles. Regular topper. You know, pally. That’s what I like about a really decent party — you meet such topping fellows.

The Miles that Ginger finds to be such a topping fellow is called Miles Malpractice — who is completely unserious, flamboyant and effeminate. At one point, he is described by his aunt as looking “terribly tapette.”

Often referred to as the Bright Young Things, the young hedonists of interwar London lived a life of decadence and pleasure that was divorced from the struggles and anxieties of the vast majority Britons in the twenties. It was as though their panacea for the shock and horror of World War I and the Spanish Flu was to throw themselves headfirst into the escapism of fancy dress parties, extravagant socials and drinking. One of the core tensions in this book is Adam’s engagement to Nina Blount. The wedding is called off multiple times, due to the precarious state of Adam’s finances. And in their clipped dialogues — often over telephone — we learn that Nina is the epitome of a vacuous and entitled socialite. While the reader might feel a modicum of empathy for Adam and his haplessness, there’s nothing endearing about Nina. She’s vapid and spoiled to the core. There’s also little discernible emotional depth to their relationship. When she agrees to an engagement with Ginger, mainly on account of his good finances, Adam offers to sell her to Ginger for 78 pounds — the exact amount he needs to pay his room and board debt to hotelier Lottie Crump.

Gossip columns provide an income source for writers, including for Adam. They also offer the general public a glimpse into upper class debauchery and they keep socialites relevant and interesting. The problem, however, is that the only way to keep readers hooked is to constantly ratchet up the level of scandal and outrage, while at the same time not alienating oneself from the people featured in these articles.  Adam and others eventually take to simply manufacturing tabloid stories and even making up people. Today we read a lot about ‘fake news,’ but that’s exactly what we see in Vile Bodies as well. The tabloid journal quoted frequently in the novel is aptly entitled The Daily Excess and the gossip column’s writer is known by the pseudonym Mr. Chatterbox. It’s a revolving door position at the paper — the man behind the pseudonym changes several times in the novel as writers fail, in succession, to provide the right amount of moral outrage to readers, while keeping access to the people and parties that provide all the salacious content.

In one of the most memorable scenes, we get a colourful 1920’s example of ‘fake news.’ Mrs. Melrose Ape and her angels are at a party thrown by Lady Margot Metroland. Mrs. Ape is to give a sermon, but before that happens Lady Metroland suggests to an unhappy-looking Chastity, one of Mrs. Ape’s angels, that she could find her a much better job as a prostitute in South America. “You’re far too pretty a girl to waste your time singing hymns,” Lady Metroland tells her. Simon Balcairn, a gossip journalist with a wrecked career, fabricates an entirely false story about what happened at the party, making it out to have been a religious revival and conversion experience:

The Hon. Agatha Runcible joined Mrs. Ape among the orchids and led the singing, tears coursing down her face…Barely had Lady Everyman finished before the Countess of Throbbing rose to confess her sins, and in a voice broken with emotion disclosed the hitherto unverified details of the parentage of the Present Earl…The Marquess of Vanburgh, shaken by sobs of contrition…Mrs. Panrast, singing feverishly…Lady Anchorage with downcast eyes…The Archbishop of Canterbury, who up to now had remained unmoved by the general emotion, then testified that at Eton in the eighties he and Sir James Brown…

The fabricated news story is a masterpiece of innuendo.

The unhealthy reciprocal relationship between media and readers seeking to be entertained, as well as media and media personalities, is something that is very much part of our world today. Like an addiction, in order to stay interesting and relevant, media stories have to become increasingly sensational and outrageous. It’s a downward spiral. While this type of tabloid journalism first appeared in the early twentieth century, the middle-class belief that the upper classes engaged in immorality and excess was nothing new, especially in Britain. Many in the middle-class saw themselves as morally superior to the privileged and these tabloid stories reinforced that conceit.

There’s an extraordinary number of characters in Vile Bodies. Although many of them pop in and out of scenes that flash before our eyes, their names are memorable and they speak with unique voices. We have the American female evangelist Mrs. Melrose Ape and her troupe of young women dressed up as angels, one of whom is called Divine Discontent.  There’s Prime Minister Walter Outrage, Lady Fanny Throbbing, the hotelier Lottie Crump, Lady Circumference, Miles Malpractice, Miss Runcible — who is always hard to forget — along with deposed foreign royals and eccentric or intoxicated majors or colonels. And, of course, we have the enigmatic Jesuit priest, Father Rothschild — who seems more clever and learned than anyone else in the novel. Overall, however, Waugh isn’t kind to his characters. They’re quite grotesque caricatures and he mocks them incessantly. Perhaps ironically, not only did Waugh come of age in the twenties, but while at Oxford he engaged in the sort of partying and social-climbing that he mocks in Vile Bodies as insipid, lacking any moral compass and meaningless.

Waugh was at a turning point in his personal life when he wrote this book. His wife — also called Evelyn but referred to by their friends as “She-Evelyn” so as to avoid confusion — had decided to divorce him as he was writing Vile Bodies. Knowing that, it’s hard not to see something of Waugh’s misery and the conduct of his ex-wife in the life and behaviour of Adam and Nina. And there’s another thing too: in Vile Bodies, Nina suggests that her sexual relationship with Adam was dull. In real life, She-Evelyn once commented about Waugh: “All this fuss about sleeping together . . . I’d sooner go to my dentist any day.”

Waugh was also at a spiritual turning point as he finished writing Vile Bodies. It was in 1930 — the year that the novel was published — that he converted to Catholicism. (Waugh described himself as having been an atheist prior to his conversion.) He was prepared and formed by a Jesuit priest. The novel’s title itself (not what he planned to entitle the book originally) is also a reference to religious imagery and themes. The term ‘vile bodies’ appears in Philippians 3:21, and is a reference to Christ and transfiguration: “…Who shall change our vile body, that it may be fashioned like unto his glorious body, according to the working whereby he is able even to subdue all things unto himself.” In one sense, the novel explores the meaninglessness of an existence not grounded in some belief in a transcendental.

As outrageously funny as Vile Bodies often is, there’s a dark horizon that lurks just beyond. The reader can feel the darkness amidst the humour, especially in the second half of the book. The novel foreshadows the Second World War. It paints a picture of a generation trying desperately to blunt the trauma of the First World War, as it careens towards another world conflagration.