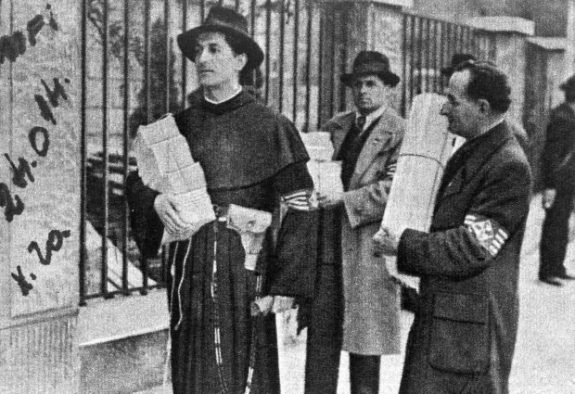 Published by Christopher Adam on March 11, 2019

We know from the revelations of the past nearly two decades that some of the men who joined the Roman Catholic priesthood were socially and emotionally maladjusted, and used their position of authority to abuse the most vulnerable in their community. There are also today a number of priests, sometimes younger ones, who not only subscribe privately to the most odious examples of political extremism but find ways to infuse their parishes with this insidious material, hoping over time to transform the community to which they are assigned. The story of wartime Hungary’s Father András Kun, a member of the Order of Friars Minor, was an extreme example of how a priest wed to Hungary’s fascists, the Arrow-Cross, engaged in widespread physical and sometimes sexual violence against Hungarian Jews and ultimately engaged in mass murder.

In 1943, Fr. Kun either left the Order of Friars Minor or was expelled; according to the late journalist Rezső Szirmai he was expelled. And it is worth noting that while there is a lack of clarity on whether he ever held faculties as a priest, he gave homilies and occasionally celebrated weddings in Budapest’s Városmajor Heart of Jesus Parish. In 1944, Fr. Kun commanded a death squad unit in Budapest. Wearing a cassock, a Roman collar, a pistol and a crucifix, Fr. Kun personally ordered and oversaw the murder of Jews. In many cases, he instructed his men to have the victims line up on the banks of the Danube and would then give the following command to the firing squad: “In the name of Christ–fire!”

In January 1945, Fr. Kun ordered the torture and murder of Transylvanian Jewish writer Ernő Ligeti and the extermination of his family. Fr. Kun and his death squad brutally tortured Ligeti’s young son too, along with wife. The three of them were taken to Arrow Cross headquarters at Andrássy út 60, interrogated, stripped naked and tied together. Then around midnight, they faced a firing squad, with Ernő Ligeti and his wife killed on the spot, but their son Károly (Charles), surviving four bullets and eventually recovering from his wounds and emigrating from Hungary. (More recommended reading on Ernő Ligeti here.)

Fr. Kun’s rampage continued. Two days after the atrocity committed against the Ligeti family, he and his men attacked the Chevra Kadisha’s hospital in Budapest’s Maros utca, where 92 patients were murdered. Two days following that, Fr. Kun and his Arrow-Cross men stormed a hospital in Városmajor utca, murdering 130 patients and 24 nurses. Amidst their killing spree, Fr. Kun and his Arrow-Cross death squad also robbed their victims of valuables and non-Jews were sometimes victims of their violence too. This is what ultimately led to the original charges brought against Fr. Kun even before the end of World War II.

On 19 September 1945, András Kun awaited his execution by hanging that afternoon after a postwar tribunal found him responsible for at least 500 murders during the Holocaust. Mere hours before he was set to die, Kun participated in an interview with journalist Rezső Szirmai, who went on to speak with 20 convicted Hungarian war criminals and published a book entitled Fasisza lelkek (Fascist Souls) in 1946. Some of the other interviewees included Ferenc Szálasi (1897-1946), leader of Hungary’s Arrow Cross, Andor Jaross (1896-1946) who helped orchestrate the deportation of rural Hungary’s Jews in his position as Minister of Interior and the Nazi collaborationist prime minister Béla Imrédy (1891-1946). This dark collection of interviews lay forgotten for decades, until a second edition was published in 1993.

Szirmai prefaces each interview with a brief summary of his observations on the demeanour of the condemned man with whom he speaks and the interviews themselves contain his thoughts too. While the interviews provide fascinating insight into the minds of these men, some of the observations in the prefaces read as sensational. Nonetheless, if one gets beyond the unrestrained language, the observations themselves are telling. We learn, for instance, that on the day of his execution the 34 year old András Kun appeared entirely stoic, even emotionless, as he awaited death. Some of the language used by Szirmai suggests a lack of real remorse and even a “nefarious” passion that still burned in the condemned man.

In his interview, Fr. Kun denied the charge of murder or that he ordered murders, as well as charges that he engaged in the sadistic torture of women. He did, however, admit to engaging in some beatings of Jews, but ultimately claimed that he had been brainwashed to despise Jews due to exposure to antisemitic propaganda.

“The propaganda drilled into us the belief that the Jews lurk behind the Bolsheviks. Amidst the wildest battles, I stood with this conviction and as Jews came before me, I beat them,” explained Kun to Szirmai. When Szirmai responded by noting that the manner in which Kun tortured vulnerable people displayed signs of sadism, Fr. Kun did not offer a denial, instead remarking: “This perversion exists, in a dormant state, in every soul.” When asked if it existed in his soul as well, Fr. Kun responded: “If it did, then it was dormant. I was not conscious of it.”

In the interview, Fr. Kun said that after these beatings, he had many sleepless nights. Despite this, the very next morning he would proceed to beat and torture people yet again. He claimed that all of this was a result of his misguided and “excessive patriotism,” which eventually “overpowered” his Catholic faith. He continued to go to confession after committing atrocities, but then did not stop the abuses.

In a particularly perverse manner, Fr. Kun claimed that his abuse of Hungarian Jews stemmed from his strong sense of compassion and humanity. “I always wanted to reduce human misery and suffering. This is why I fought against the Jews. They are the lords of capital. The Jews were always the ones to walk on the sunny side of the street,” Kun said.

One exchange in the interview is especially noteworthy and worth quoting verbatim:

–What is your opinion of Jews who converted to Christianity?

If they truly believe and live a Christian life–

Yes. If they truly believe in the key elements of the Christian faith and live according to these, they will be saved. If not, then they will end up where they rightfully belong.

At the end of the interview, Szirmai offers a brief psychoanalysis–one that he may not be particularly qualified to provide and which is polemical at times. Szirmai draws a line between Fr. Kun’s repressed sexual desires, stemming from the rules of celibacy, his desire for power and recognition, and ultimately to the atrocities that he committed. The initial response to his actions and behaviour was to presume that he had suffered a nervous breakdown and to be prescribed two weeks of bed rest by his doctors, after which he resumed committing and ordering acts of violence and murder.

The interview with Fr. Kun offers unique insights and Szirmai’s analysis, though more than a little tendentious and problematic, does make at least one important point. Given the knowledge and understanding that we have today, it is clear that socially maladjusted young men who join the priesthood seeking the sort of recognition and power, even if only over a small congregation, that they could never attain in civilian life, is a toxic combination.

This article also appeared in The Hungarian Free Press, entitled: “The genocidal priest — The last interview with András Kun.”