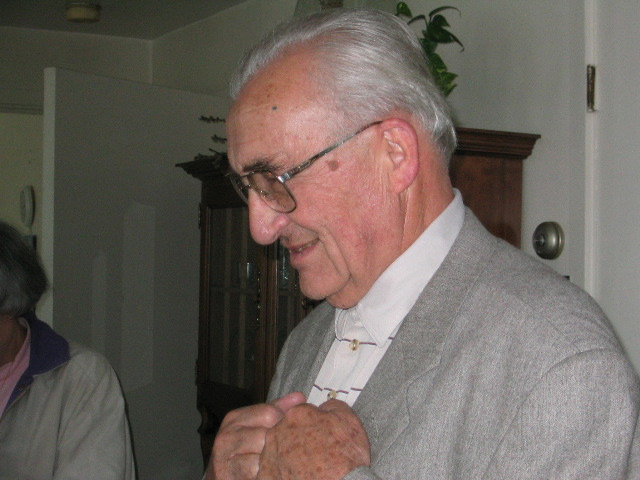 Published by Christopher Adam on March 21, 2019

Father Ferenc Deák (or Deák atya, in Hungarian) died yesterday. He served Our Lady of Hungary Parish in Montreal from 1975 to 2007 and played a truly formative role in the lives of those of us who grew up in the eighties and nineties. He baptised me in 1981, I had my first communion with him in 1988 and then as a young adult, in the early 2000’s, I got to know him through my volunteer work in the parish, especially as a teacher at the Hungarian Saturday School. He believed deeply in community and in recognizing volunteers. As part of his mission to us, and following a tradition that exists in so many faiths, he built community by sharing a meal with us after each Saturday of teaching–and he prepared that meal himself in the rectory kitchen.

As a Jesuit, Fr. Deák placed a great emphasis on education and on the youth. He also recognized that many young Hungarians who arrived to Canada from Hungary of the seventies and eighties had no real connection to the Church. He welcomed them to the parish regardless, wherever they happened to be in life or in their faith, and aimed to provide a safe, welcoming Hungarian-speaking community.

In the early 2000’s a handful of us formed a new young adult group in the parish, of which Fr. Deák was extremely supportive. We organized film screenings of contemporary Hungarian movies, picnics, May Day celebrations and volleyball tournaments in nearby Jarry Park. On more than one occasion Fr. Deák showed up in the park to play some volleyball with us–and he was already close to eighty at the time. On another occasion, we screened a film in the parish that contained — unbeknownst to me — some rather “edgy” scenes. Eighty year old Fr. Deák happened to walk in on one of those. He always had impeccable timing. He didn’t say anything, eventually walked out, and I was fairly sure that the end was nigh for our little young adult group. That night when I got home, the phone call came…But to my surprise, Fr. Deák was perfectly cool, calm and collected.

“Well, how did you feel about the film?”–he asked. I chose my answer carefully and said something to the effect of needing to do a better job vetting movies in the future.

“I think that sounds like a reasonable plan,” responded Fr. Deák, and I never heard of the incident again…and our young adult group continued and prospered for a number of years.

After more than three decades serving our parish in Montreal, and after prior years spent on mission in Chile, Fr. Deák returned to Hungary in 2007. A long and meaningful life came to its conclusion today–one that will be remembered fondly by many in Montreal. Rest in peace, Deák atya!