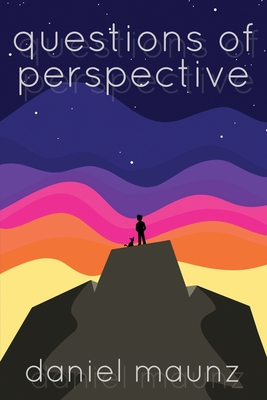 Published by Christopher Adam on March 31, 2020

Daniel Maunz mailed me a copy of his book, scheduled for release in May 2020, in exchange for an independent review. What’s paradoxical in Questions of Perspective is that we have in our hands a deeply human narrative, even as the author explores the divine concept of omniscience. In the surreal reality of COVID-19, which all of us are living, that is a welcome paradox.

The book opens by transporting us to the steamy, sweaty, anxiety-drenched world of New York City courtrooms on an especially humid day. Dave Randall is a young lawyer early in his career and despite his youth, he comes across as something of a curmudgeon. A closer look, however, reveals that he is mainly an introvert. Dave develops what seems to most as an entirely improbable friendship with the law firm’s oddball recluse, John Manta. The firm’s partners and senior management tolerate John’s curious, deeply anti-social behaviour and poor communication skills out of a belief that he probably has Asperger’s. What few notice, however, is that behind this misanthropic facade and past the almost blinding eccentricity, John is a caring, deeply principled man ill at ease in a world where those two qualities are not frequently at the forefront of daily life and decisions.

The friendship between Dave and John grows. The two learn to speak a language that others around them don’t understand and they embrace silence in a world that is perpetually loud and bustling, one that finds being still uncomfortable. When John vanishes inexplicably, Dave is truly lost and the void caused by the absence of that friendship is hard to fill. He is left with John’s cat Peaches, who he adopts, and a life as a lawyer that is unfulfilling even with the promise of imminent promotion and advancement.

Dave never gives up on discovering what happened to his best friend, and this is where the narrative takes a sharp turn in a more philosophical direction. Do we even have the language and capacity to truly comprehend the concept of omniscience, that is being all knowing? Daniel Maunz takes up the challenge of trying to do so through fiction. In this narrative, omniscience is connected to the concept of feeling all, rather than knowing all from a lexical perspective. It’s the gift of being able to feel and internalise the raw existence of all that is living and all that ever was– from a tree, to a human experiencing a trauma to a historic ruler. At one point, this is described particularly poignantly: “You are a tree subtly tilting toward the sun to the south. You are a hamster determinedly running nowhere in a wheel. You are a baby calf crying at being torn away from your mother after only a scant few days of life. You are a blue jay instinctively burying an acorn to which you will never return.”

At the heart of Maunz’s narrative seems to be the concept that revelation comes through personal experience. In order to truly know, we must feel. Setting this story against the backdrop of a New York City law firm served as an effective contrast — it’s a world, certainly according to stereotypes, where one gathers lexical knowledge and must be able to work with it, whilst being emotionally distanciated from knowing– trying as hard as possible not to feel.

Parts of the narrative are quite funny, mostly in an understated, dry way. And the humour, as well as the relatability of characters and situations, especially in the office environment, not only helped to humanize a profession that is not always perceived as human, but also helped to make the impossible concept of omniscience much more palpable and imaginable. In terms of the legal profession, it’s worth noting that the author is himself an attorney in New York City and in fact he works in the same field that the protagonist is employed. In addition to Questions of Perspective being a good read, I felt that I learned something of how law offices and courts work internally. Most of all, however, I appreciated that Maunz managed to build a narrative around the difficult concept of how all of us are interconnected, without sounding preachy.